Or in short, what made me write about this even if I watched the movie more than a year ago. 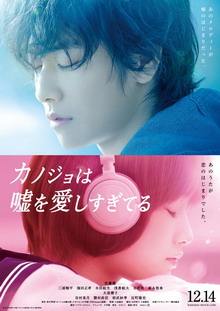 Trivia: This picture was somehow weirdly familiar because I saved this picture from someone’s IG account year 2013, hoping that I’ll watch this somehow because it’s Japanese. I never did though. The saved screenshot was forgotten.

So how did I end up here? It was last year after finishing a Kdrama that I didn’t know what to watch next. I saw The Liar and His Lover korean drama version and started watching episode one. I just didn’t get the drama and stopped watching. But I got somehow intrigued by the story so I started looking it up and saw that it was an adaptation of a Japanese film and manga.

I immediately looked it up and watched it and there goes my heart. This was my reaction to it last year.

And a year after I watched it again. Why? I saw the OST and started playing it and my heart just melted on the songs – Sayonara no junbi, Sotsugyou, Ashita Mo, etc.

What made me like it:
Of course. The music. I’ve been drawn to most OSTs but this one’s different. The first time I heard Sayonara no junbi wa mou dekiteita on the first time I watched this – I literally cried. It is the first time that it happened. Even though I don’t understand the lyrics, the music just struck my heart. And then followed by the other songs, especially Sotsugyou. I didn’t know the meaning of the songs – I just knew it after – and it made me like it more.

Sakurako Ohara and Takeru Sato are brilliant actors – I was not bothered by their age difference in the film and it was supposed to bother me. And in the span of less that two hours they made me fall in love and get heart broken. If that is not good acting, I don’t know what that is.

And the shots. The film maintained its warm color grading – a bit warm but gloomy and then suddenly turning bright – that was how I would describe it. And the caterpillar to butterfly transformation. What else? It was very beautiful. The scenes were nicely captured and I can’t find the right words to describe it – it is beautiful? Amazing? Pleasant? That must be it. Pleasant. It’s like I was there with them. Or this is me missing Japan taking its form. This is the reason why I love cinematography. It makes you see normal things in an exquisite way. 🙂

I know the story was a bit usual, for a manga. Emotionally sad guy meets a girl that would brighten his world but how it was magnificently executed was the reason I like it. In the usual way – this plot won’t work for me though. But it hits me right in the heart – with its perfect acting and music and cinematography and it was pure pure heart – this was a recipe for something that I would definitely want and obsess over. Haha.

So there. I also watched the Side Story a while ago and darn, it was so good I wish there was more.

I’m sorry for this simple thoughts, the film was so fascinating I can’t even write a decent review. I’m just trying to get back in my writing so have patience with me. 🙂

Last thoughts: This film hits me right in the heart, made me fall in love once again with music and of things that don’t make so much sense but if it makes you happy, you should go for it. And that I am still emo. 🙂 Darn, love and dreams story and I’m sold.

taiwan will always be the place where i lost my camera. and still found it. utmost respect and gratitude to all the people who helped me in small and big ways and to my mother and sisters for being patient when it is the first time i lost something and i am at a loss on what to do- and most especially to the police who located the camera. 🙌🏽 three cheers for sweet faith in humanity 🎄also best christmas gift ever.
how can they say, ‘jenny won’t you come back home?’ coz everybody knows you don’t ever wanna come back let me be the one to save you
i think a post is in order mark this in my memory. #mychemicalromance is back and it still feels unreal. 🖤 last september out of nowhere i just listened to the full album of the black parade. i’ve listened to them before but my aversion to anything mainstream prevented it. so there i go and i cant believe i have not listened to that album at all (like the american idiot album - timeless). and so i embarked on this journey to listen to all of their four full length albums and some single releases. and while i enjoyed their music immensely i am torn like why did i chose a currently nonexisting band to get obsessesed with? there i go reading everything from gerard way’s poetic breakup letter to a lot of pinterest memes. pinterest suddenly became my safe place. watching anything from fancam videos of their earlier days to their last show. but listening to them became my therapy. it started a fire inside of my slowly dying self. suddenly i am able to gather pieces of myself that broke apart after all of the bullshit that is the most part of this year. it made me love my own quirky, rare, unique, weird self that so many people don’t understand and rejected. bit by bit i am able to take small steps to what i love. my self-hate fueled by the rejections i received were slowly fading. it is a therapy. their music’s lyrics is like an anthem to never let the cruel world take you alive. it made me feel like even if nobody cares it’s alright “and if we can’t find where we belong, we’ll have to make it on our own”. a lot of their songs i cried to and gave me power to wake up another day. i cannot go back to who i was before. i grew into another version of myself. it feels weird listening to a dead band but at that time their music is all that i can hold on to. and yes there were reunion theories. and i never thought i’d live to see the day that it came true. look alive, sunshine, they’re back. they really did carry on. even if there’s only one reunion gig - i’m not complaining. the joy of having something totally unreachable finally came true is enough proof that there will always be that one thing. never let them take the light behind your eyes. #thinkpiecesbyjennicelle
🍀
wrote on the sand
june 2019
still a long way to go to surf like @guy.kid__ hahaha 💭
if i could speak to myself from ten years ago- i’d just tell her to take responsibility for her life. search for things that will make her heart ignite and will make her soul on fire. she can never be limited by what other people can do. her dreams are limitless. create a path for herself and be scared, but don’t let that feeling drown her. and that she can always always start in the middle- she’s always never too late. being different becomes good when you realise it. and to people who will hurt her: she can either tell them to go f*ck themselves or to forgive and let go- choose which one will give her peace. she doesn’t need people in her life who’ll make her feel less than her worth. and lastly- she can be wrong sometimes and it takes a lot to admit it and get it right 🍡
I've never seen any life transformation that didn't begin with the person in question finally getting tired of their own bullshit. 🙊
%d bloggers like this: